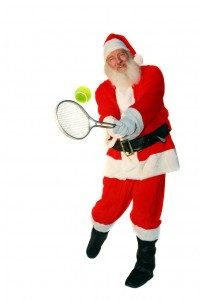 The committee of the Raynes Park Residents Lawn Tennis Club would like to wish our members a very merry Christmas and a prosperous and successful 2017. We look forward to seeing as many of you as possible at the club and on the courts and hope you will continue to enjoy your tennis.

This year was an exciting one for the sport of tennis and for the club. On the back of the success of the Great Britain team in the Davis Cup we hosted a series of events that attracted many new players to the club and the success of Andy Murray continued to capture public's imagination and draw people to the game.

We are looking forward to another year of continued growth and success at the club in 2017. There will be some new coaching initiatives  and plenty of opportunities to get involved in the club and play, whether it is in the social sessions, the box leagues or the club tournament.

So from everyone on the committee have a very merry Christmas.

Congratulations to all the children that competed in the final junior tournament of 2016. We had a great turnout of enthusiastic players who are making huge strides with their tennis. We were also delighted that Paul Sadler, club chairman, was able to join us and present some of the prizes and officially open the new Sport England-funded hitting wall.

Thanks must also go to José who put a lot of effort into organising the event to ensure it ran smoothly. He also got the prize for the best seasonally dressed coach of the day.

The tournamet brings an to end a year of of huge change for the Saturday juniors. We said goodbye to long-standing coach Michelle Shanley in March and welcomed José, who was previously running the weekday coaching. Under programme has gone from strength-strength and we now have nearly 60 children attending on Saturday mornings.

And finally thank you to all the children and their parents who have attended and supported the club week in week out, through rain and shine. A very happy Christmas and a peaceful and prosperous New Year to all our juniors and their parents. We look forward to seeing you all back on court on Saturday January 7th.

Here is the list of all winners from Saturday's tournament.

U10's we had joint winners and they were Mark Csejtei and Freddie Colburn, runner up was Rhea Bhaisare

U12's winner was Rowan Ireland and runner up was Viren Patel

Christmas is almost upon us and we have a weekend of festive events at Raynes Park.

Jose is running our Christmas Junior Tournament on Saturday 17th from 9am-3pm. At around 11am, there will be a short opening ceremony for our Sport England funded lights and newly completed hitting wall, with our Club Chairman cutting the ribbon. Social tennis will commence at a later time of 3pm and floodlight tokens will be provided.

On Sunday 18th, it is our Christmas American Tournament. Start time is 1pm and this will replace social. Please sign up in the Clubhouse. There is no entrance fee but please bring a £5 gift for Secret Santa.......everyone gets a present!!